I am forwarding this call for the Governor of Colorado to pardon *Joe Arridy, 23. It was drafted by **Robert Perske, writer, journalist and humanitarian. The petition respectfully requests the governor to  pardon “Little Joe” Arridy posthumously for the crimes of rape and murder of a 15 year old girl, Dorothy Drain, on August 15, 1936. Sadly, Little Joe has long since been convicted and ultimately executed at Colorado Territorial Prison, Canyon City. The arrest, trial and execution of Joe were media events likened to a carnival in darkly festive flare. Socialites flocked to make an appearance at this depression era kangaroo court.

Little Joe was locked into a pre-pubescence world since he had the mentality of a 6 year old boy, innocent even in thought. Joe was the ideal suspect and detectives took full advantage of his naivete coercing a confession almost immediately. Being of Syrian decent added fuel to the community’s frenzied scorn as well. The media poisoned public opinion against Joe across the state with fabricated sensational tales that horrified and disgusted readers. They painted Little Joe as a vial and perverted killer of little girls. Joe was a dead man walking even before he was arrested. Guilt was already assumed. He was convicted and sentence to death. Then he was executed in the gas chamber on January 6, 1939 to the joy of cheering mobs, justice was served. They say Joe was smiling when he entered the death chamber for he truly was a child and could not comprehend the concept of his own death. In the evening after Joes execution even the hardest of convicts wept because of the injustice that shrouded the day. The bittersweet irony of Joe’s dark journey was the fact three months after his execution the true 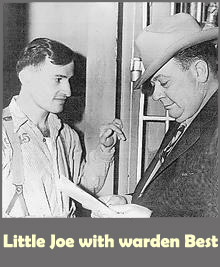 killer of Dorothy Drain was arrested then confessed to the grizzly assault.